This past year has been an eventful, bittersweet one. After a lot of hard work on the former Champion Lands (now renamed the Kingdom Heritage Lands), we finally reached a goal we have been working toward for years, only to have the guiding spirit of the project taken from us.

Major Events of the Past Year

Kingdom Heritage Trails Day, June 22, 2019. This was a day we had all been working toward for many years—the official opening of the newest NEK trail system. Fellow hikers and well wishers arrived from all over Vermont and beyond to be a part of it. There were short acknowledgments of all the individuals and groups who helped make this happen and Jean Haigh, past GMC President and NEK Section Director, applied the blue blaze at the start of the access trail in Island Pond village. Jean and Luke O’Brien, NEK Section member, past NorthWoods Director, now with Vermont Department of Forests, Parks. and Recreation, were two of the visionaries—and indefatigable toilers—who helped bring these trails to fruition. 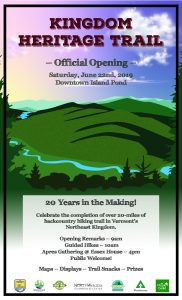 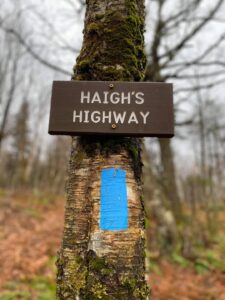 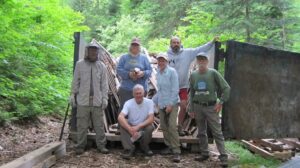 Summer Meeting, July 27. The Section held its usual summer quarterly meeting at Lenny Targonski’s camp on beautiful Holland Pond. It was a gorgeous summer day as many of us hiked about 6 miles to Round Pond and back, while others stayed behind to enjoy the pond. There was food, drinks, kayaking, swimming, and hiking—and yes, eventually a business meeting. 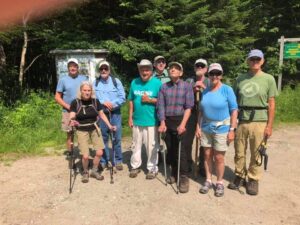 Long Trail Day, August 1. Our selected section of the Long Trail was from Route 242 over three peaks to Route 105, a distance of 9.3 miles. Co-leaders John Predom and Jean Haigh organized this as a two-part hike. Jean led eleven of us in hiking to the summit of Jay Peak; then six of us continued on to Route 105. Our section was one of the top fund raisers for the day. 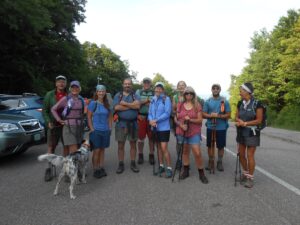 Parker Pie Membership & Fundraiser, August 31. Headquarters GMCers John Zaber and Tina Premo along with Paul Trojano from the NEK Section got together at Parker Pie in Glover to promote the Club, recruit new members, and raise money. Parker Pie donated $1 for every draft beer sold and $2 for every large pizza—and we raised over $700 that Saturday. 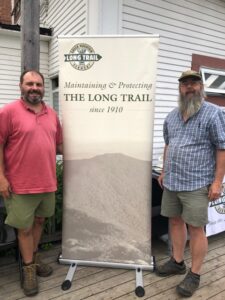 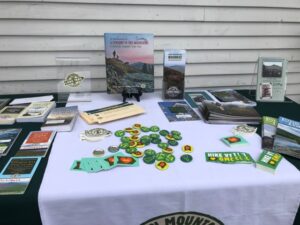 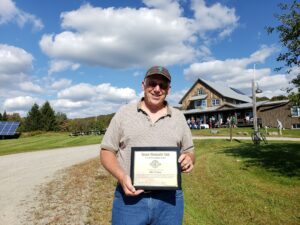 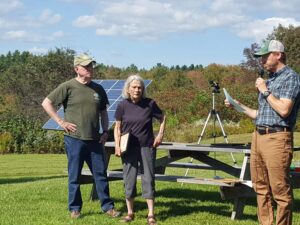 Fall Meeting, October 5. The section held its regular fall quarterly meeting at the Burke Mountain Clubhouse and Library in East Burke. The day began with a wood stacking work detail at Wheeler Pond, continued with short hikes in Westmore Town Forest and Sentinel Rock State Park, and moved on to East Burke for our usual potluck supper meeting. A busy day all around.

Victory Hike, November 2. Jean Haigh led several members on a hike on the mountain bike path along the base of Umpire Mountain’s eastern flank in Victory. While crossing a brook Jean suddenly collapsed and fell into the arms of Paul Trojano just behind her. She never regained consciousness. Christopher Rice reports she passed on like the gentle breeze moving through the treetops of her beloved Northeast Kingdom. Rest in Peace, Jean. 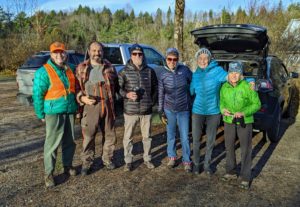 Jean Haigh Memorial Hike, November 17. About 40 people gathered on the CCC road between Bartlett Mountain and Mt. Hor in the Willoughby State Forest to hike in Jean’s memory. It was a bright, crisp day with a light snow on the ground. After the hike, the group reconvened at the Burke Mountain Clubhouse in East Burke for refreshments and much talk of Jean. 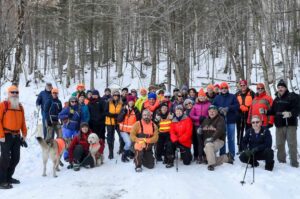 First Day Hike, January 1, 2020. A large group met at Perry Holbrook State Park for a snowshoe hike in fresh snow. A slight wind made for a chilly, but refreshing way to start the New Year. The group trekked to all three ponds, up the longer easy way, down the short, steep way. 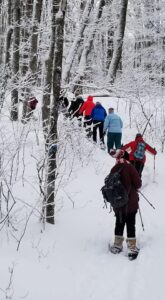 Winter Meeting, January 25. We held our winter quarterly meeting at Lenny Targonski’s Camp on Holland Pond. It was our first meeting without Jean and very hard for all of us; Lenny began by offering a pray. There was a short snowshoe, a business meeting, and a solemn lunch. 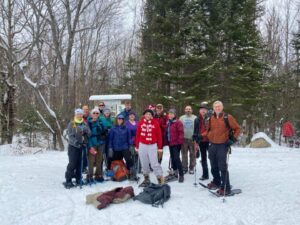 Taylor Series Presentation, February 20. The Section hosted a program at the Craftsbury Outdoor Center by Erik Hanson, a biologist with the Vermont Center for Eco-studies. Hanson discussed the rebound of loons in Vermont in “The Natural (and Unnatural) History of the Common Loon in Vermont.” About 30 people heard an interesting, informative talk. 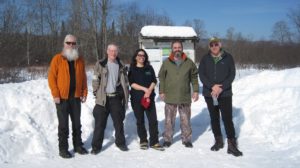 Headwaters Camp Shoveling Detail, March 3. Ami English and John Predom snowshoed in to shovel off the camp roof on a beautiful winter day. It was the second shoveling of the season and the snow was over knee deep. They also had a well-deserved lunch and a beer afterward. 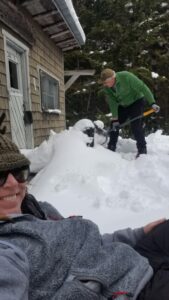 Winter Trails Day, March 7. John Predom gave a presentation on Snowshoe Art and later seven participants created a GMC logo in snowshoe art on a back field at Waterbury headquarters. They then joined the rest of the group around a bonfire for food and drink. 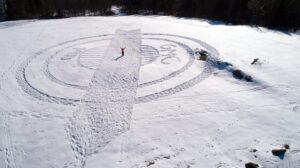 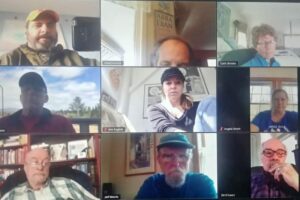 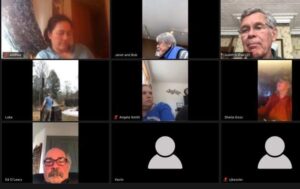 Wheeler Pond Camp Work Project, May 14. Paul Trojano, Cathi Brooks, Bart Selle, and John Predom stacked over a cord of wood for the next season, fueled by Bart’s chocolate cookies. 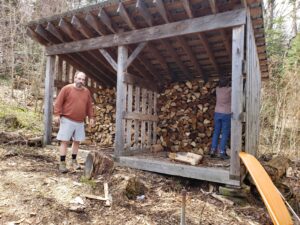 And we cannot forget all our trail adopters who have been out checking their trails and doing clean up to make the trails passable for this hiking season.

NEK members have also conducted a number of informal hikes and snowshoe tramps throughout the past year, often arranged with a last minute phone call or email. There are few weekends without NEKers walking the woods of the Kingdom. We are all still hiking locally, missing our larger organized outings, and looking forward to resuming get-togethers as soon as it is safe and healthy. But most of all, we miss our Jean, our muse and our mentor.

For the 230 member of the NEK Section,

Thank you to Edmund Guest for reviewing and editing this report 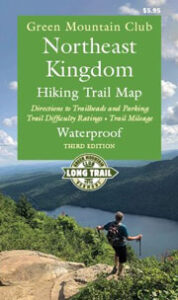 Get Your Trail Map! Get the Digital Avenza NEK Trail Map

The trail closure on Monadnock Mountain remains in effect. There's still a "NO TRESPASSING" sign on the gate at the gravel pit, although it is easily overlooked when the gate is open. The continued presence of an old trailhead parking sign at this location only adds to the confusion over its status, but a person working at the gravel pit confirmed to me that this trail is still closed.

As some of you may be aware, there is an alternative route that avoids the gravel pit, but I wouldn't recommend using it at this time. It follows a private right of way that encroaches on a nearby dwelling. While this property isn't posted, its owner has expressed no interest in encouraging public access to their land. Please respect this choice and find another mountain to hike for now. Thank you!

As we all know, trails don’t magically appear, nor groom themselves. There are upkeep costs throughout the year. It’s with great appreciation that our NEK Section would like to extend a special thanks to local businesses that have made financial contributions. Their generosity helps to provide beautiful and accessible trails, especially the latest Kingdom Heritage Trail, and all others.
Columbia Forest Products
Community Financial Services Group
Northpoint Dodge